I began this year with a resolve to get an EP recorded. At the risk of tooting my own horn, I was tired of having nothing to offer when supportive audience members approached me after a gig asking, “Where’s your CD?”

One tricky part is I have no band. I certainly have no shortage of incredibly talented friends who have offered to back me. I even invited a few to my house one day in December to jam, but it didn’t work as well as I would have liked. It wasn’t their fault, which leads me to the other tricky part. I have little idea what my music needs beyond the melody, lyrics, and the guitar arrangements that I work out, or that Greg Newlon developed for me when I was working with him.

In other words, I don’t have a producer’s ear, and I needed help. 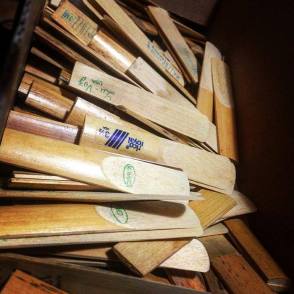 Happily, I was steered to Kenny Schick at Basement 3 Productions in Boulder Creek. Kenny specializes in working with singer-songwriters like me, and is weirdly blessed with an insane ability to play many instruments extremely well. He’s basically a one-man band, one track at a time.

He is also blessed with the ability to hear what a song needs with only melody, chords, and a sometimes tentative guitar part to work with.

I sent him my first demo in January of “Leave It Alone,” previously known as “Scab,” with which Greg helped me so much that he has a co-writer credit whether he wants it or not. When I received Kenny’s sketch of the song a short while later, my head exploded. He added drums, bass, electric guitar, organ, and eventually sax, and turned a stammering, hesitant tune into a sizzling, hard-driving blues ode to obsessive thinking. Listening to his sketch, I was overcome. I was amazed at his ability, and, frankly, amazed that a song I wrote sounded so damn good. I didn’t know if it was lipstick on a pig, but I was willing to take it even if it was.

I am familiar with how merciless the recording process is from my work on cello for Michèle Sharik, Women with Strings Attached, Bev Barnett & Greg Newlon, and Rich Armstrong. The level of precision required is daunting to say the least. I was at one time relatively comfortable with recording on cello, and am familiar with the amount of time and hard work needed to prepare for a recording session.

The recording preparation process for the EP is fascinating, and very different from preparing to record on cello, and preparing to play live. First, it requires that I separate playing guitar from singing – because the guitar and vocals are recorded on separate tracks so they can be mixed properly. This is so odd to me considering I’ve spent the last three years working like hell to be able to do them together well. Separating the parts, and studying each closely to make sure it is doing what I want it to do is strangely satisfying. In the end, it’s a numbers game – how many times I can run each part with consciousness, intention and intelligence determines how well I will do on recording day. But preparing the vocals takes a little more …

One thing that hearing Kenny’s sketches has given me is the freedom to sing the way the songs need to be sung, and truly to be myself. I love the process of figuring out which vocal coordination each part of the song needs so that it fits both my voice and the mood. I love hearing my progress as I gradually settle into the pocket of a song, so I walk into Kenny’s studio and nail it in a take or two. Then I love putting the song back together – vocals and guitar – when I understand both parts so much more intimately. It’s like re-introducing old friends who are more mature and confident, and seeing how they get along.

In the end, this process is breathing new life and understanding into my stuff, song by song. Even more importantly, it’s helping me to love my voice and what it can do in ways I have never previously known. This is amazing to me.

So I can’t wait to share this EP with you when it’s done, which I hope will be by the end of the summer. I have plans to put together a show to celebrate its release; I will let you know when those plans firm up. In the meantime, I appreciate your support as I continue the recording process. I could not be happier.